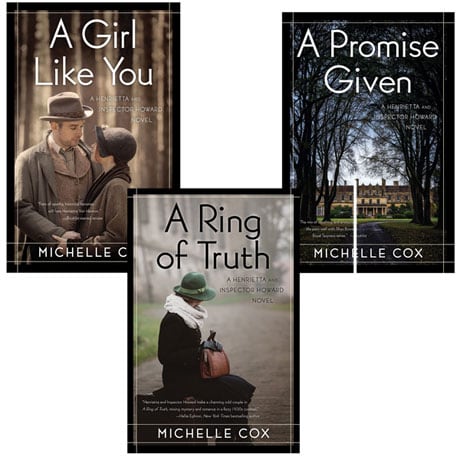 The Henrietta and Inspector Howard Mysteries (set of 3)

Members get Free Shipping  learn more learn more
Share Me:
Life in Depression-era Chicago has never been easy. But since her father's death, eighteen-year-old Henrietta Von Harmon has struggled to make ends meet for her large family. A job as a taxi dancer pays better than waitressing… until her boss is murdered and the dance hall is shut down. Desperate for income, Henrietta accepts a risky assignment from Inspector Clive Howard: Go undercover at a seedy burlesque club to help the cops capture an elusive gangster. The assignment thrusts innocent Henrietta into a dangerous new world… and into a surprising friendship with the handsome detective. A Girl Like You is the debut outing for this unlikely pair, whose sweet romance blossoms unexpectedly in the midst of criminals and ne'er-do-wells. In A Ring of Truth, Henrietta and Clive navigate class divides and family drama—and cross paths with a former nemesis—while planning their wedding. And in A Promise Given, the newlyweds join forces to investigate a murder during their honeymoon. Fans of traditional romance as well as old-school mysteries will be charmed by this evocative trilogy. (KG)