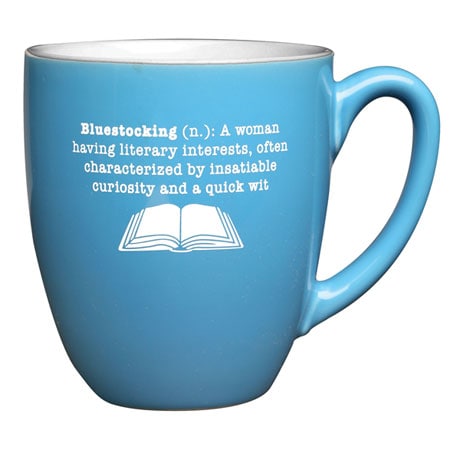 # UQ4932
You may already know that Bas Bleu translates as "bluestocking," and refers to mid-eighteenth-century women (and men) who gathered in the great salons of London for intellectual conversation and witty banter. But did you know that "bluestocking" was often used as a derogatory label for women who were considered too learned or intellectually curious? Rise, bluestockings, and reclaim the term with our handsome Bluestocking Mug, featuring our definition on one side—"A woman having literary interests, often characterized by insatiable curiosity and a quick wit"—and the Bas Bleu logo on the reverse. The 15-ounce sky-blue mug makes an empowering gift for all proud bibliophiles you know! Hand wash only.