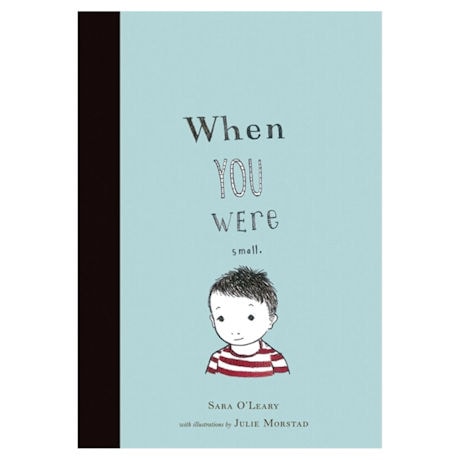 When You Were Small

by Sara O'Leary and illustrated by Julie Morstad
# UP4592 Paperback, 40 pages; 2016 (2006)
When you were small we used to give you baths in the teapot, and when you were done we could just tip it over and pour you out. —from When You Were Small

In this pair of gently fanciful books, a boy named Henry asks his parents to tell him a story…but not just any story. In When I Was Small, Henry's mother Dot (“because the name [Dorothea] was too big for me”) reminisces about her childhood as a little girl who wore the same size shoes as her doll, swam in the birdbath, and slept in a mitten. In When You Were Small, Henry's father spins tales of his son's wondrous early years, when he was tiny enough to wear a thimble as a hat, have his hair brushed with a toothbrush, and ride around in his dad's shirt pocket. You'll adore reading these books in hushed tones with your favorite young person…but be ready with your own imaginative stories about when you were small! For ages 4 to 8. (KG)