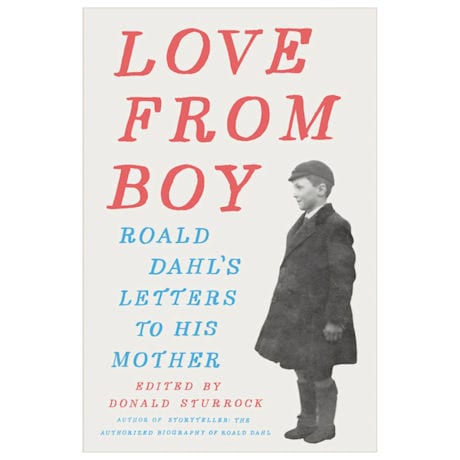 Love from Boy: Roald Dahl's Letters to His Mother

edited by Donald Sturrock
# UM2802 Hardcover, 304 pages; 2016
It's pleasant lying back and listening and at the same time watching the antics of Hitler and Mussolini who are invariably on the ceiling catching flies and mosquitoes. Perhaps I should explain that Hitler & Mussolini are 2 lizards which live in our sitting room.

Upon his mother's death in 1967, Roald Dahl retrieved a collection of more than 600 letters that he had written her over a period of four decades. Assembled by Dahl's authorized biographer, this carefully curated selection of never-before published - and wonderfully entertaining - missives offers intimate insight into the evolution of the brilliantly creative mind behind such timeless favorites of literature as Charlie and the Chocolate Factory and Matilda. As Dahl describes his beleaguered school days in the 1920s and '30s, his rowdy years stationed in Africa before the outbreak of WWII, his wartime stint overseas in the Royal Air Force, his secretive work for the British Embassy in Washington, D.C., and his meteoric rise to fame in Hollywood and New York, his signature fantastical imagination and subversive humor enliven the personal reflections, gossipy anecdotes, and hilarious social commentary (sensitive readers, beware: there are many lewd jokes about Hitler). Throughout this engrossing and endlessly amusing chronicle of a remarkable life - which is enriched with biographical details and photographs - Dahl's close relationship with his mother remains tenderly apparent. (AG)