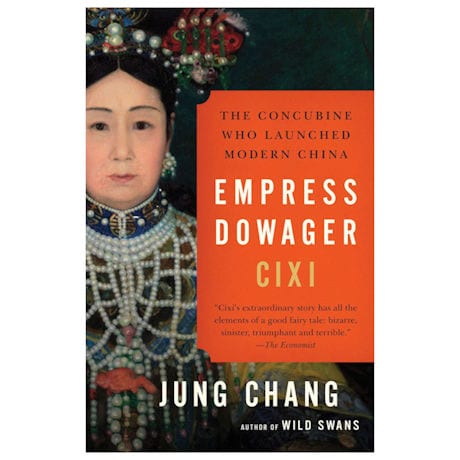 Jung Chang
# UM2442 Paperback, 436 pages; 2014 (2013)
In spring 1852, in one of the periodic nationwide selections for imperial consorts, a sixteen-year-old girl caught the eye of the emperor and was chosen as a concubine….In the court registry she was entered simply as 'the woman of the Nala family', with no name of her own. Female names were deemed too insignificant to be recorded. In fewer than ten years, however, this girl, whose [birth] name may have been lost for ever, had fought her way to become the ruler of China.

So begins a fascinating biography of a controversial woman, a former concubine who seized power in a (mostly) bloodless coup after the death of Emperor Xianfeng. During Cixi's rule, China outlawed foot-binding, introduced modern industry, redesigned its educational system, and granted new freedoms to the press. But Cixi has long been vilified for the means by which she achieved these ends, some of which biographer Jung Chang acknowledges; others, Chang argues, are lies woven by Cixi's modern successors. Complex, astonishing, and sometimes mysterious, Cixi's story is an engrossing one! (KG)