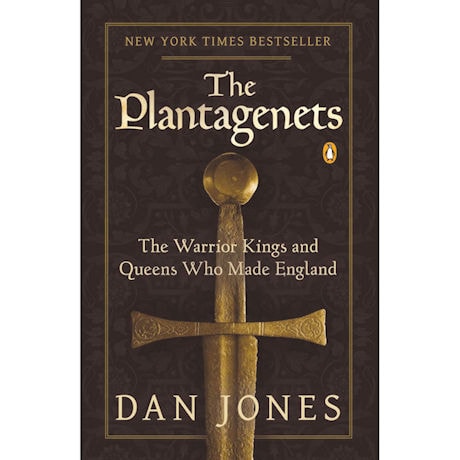 Dan Jones
# UL9192 Paperback, 534 pages; 2014 (2013)
Geoffrey of Anjou was just fifteen years old in 1128 when he married Matilda, the twenty-eight-year-old widow of the Holy Roman Emperor and the only surviving legitimate heir of King Henry I of England. Nicknamed Geoffrey Plantagenet for the sprig of broom blossom (Planta genista) he liked to wear in his hair, brash young Geoffrey would go on to sire one of the most powerful royal dynasties in European history. In this sweeping "family" biography, you'll meet King Henry II and his wily wife, Eleanor of Aquitaine; their feuding sons Richard and Prince John; three King Edwards; and more conniving cousins, treacherous courtiers, and duplicitous French rivals than you can shake a scepter at. Yet for all the treachery and bloodshed, the Plantagenets' 245-year rule, which ended on the eve of the War of the Roses, laid the groundwork for modern English law. They witnessed the signing of the Magna Carta, the rise of Parliament, and the establishment of a complex system of local and national government that is still in place today. By turns an in-depth history lesson and a juicy soap opera, The Plantagenets is a fitting royal tribute. (KG)