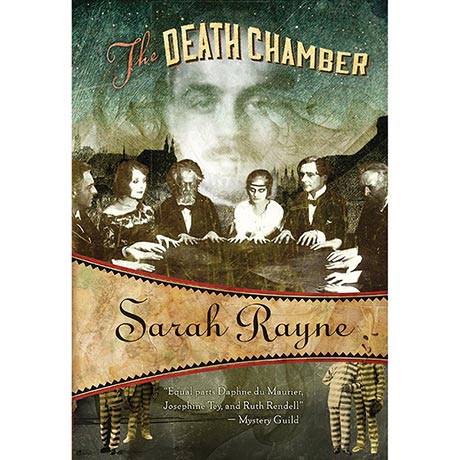 Sarah Rayne
# UK4042 Paperback, 491 pages; 2015
Calvary Gaol: For nearly 200 years, convicted murderers from across England were brought to that forbidding place to await their fates at the end of the executioner's rope. In 1938, Walter Kane arrives at Calvary to serve as prison physician, hoping his work on behalf of the inmates will exorcise the shame of his own traitorous father's death there. He cannot anticipate the secrets hidden within Calvary's execution chamber...or the part he will play in keeping them. Seventy years later, when Walter's great-granddaughter Georgina joins forces with a documentary-film crew exploring the now defunct prison, they uncover a bizarre link between the prison and a shady group of spiritualists...awakening the ghosts of Calvary's dark past in the process. I lost count of how many times I exclaimed aloud while reading The Death Chamber, bewitched by its spooky combination of murder, mystery, and family drama. Beware reading this psychologically suspenseful novel after dark! (KG)