What's A Bluestocking? at Bas Bleu

Why Were Their Stockings Blue?

In the 1700s, wearing warm-and-woolly dark blue worsted stockings — rather than the black silk stockings of formal, citified fashion — was the equivalent of wearing jeans today. It was the common denominator of casual dress. But how did the term bluestocking come to mean “a literary woman?”

Scholars tell us that the relationship between society and stockings goes as far back as the 1400s, when an elite salon of learned Venetians were labeled della calza (literally “of the stocking”) because of their elaborately embroidered leg coverings.

By the late 1500s, the fashion had spread to Paris where the term bas bleu (bas, stocking; bleu, blue) emerged to describe women with literary aspirations. (In the mid-1800s, the French caricaturist/satirist Honoré Daumier published a series of scathing political cartoons about “Les Bas Bleu.”)

The English term “bluestocking” meaning a literary woman evolved in the mid-to-late 1700s. Women of society were beginning to express their boredom with being sent off to do their embroidery, rather than being invited to engage in conversation with the men. One early bluestocking, a “Miss Carter” wrote:

“As if the two sexes had been in a state of war, the gentlemen ranged themselves on one side of the room, where they talked their own talk, and left us poor ladies to twirl our shuttles, and amuse each other, by conversing as we could. By what little I could overhear, our opposites were discoursing on the old English poets, and this subject did not seem so much beyond a female capacity but that we might have been indulged with a share of it.” 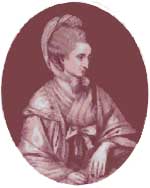 In about 1750, Mrs. Elizabeth Montagu (later called “the Queen of the Blues”) and her friends founded the first official bluestocking society in England. They invited learned men to gather informally with them to talk about books, literature, art and architecture, as well as places and events that interested them.

The story goes that this literary salon “enjoyed society in undress” — that is, in their more practical country clothing, most notably their blue worsted stockings. Hence, the term “bluestocking.” Perhaps to show off their knowledge of French, the members of the club often referred to themselves as “Bas Bleu.” James Boswell, the renowned biographer of Dr. Samuel Johnson and contemporary of Mrs. Montagu, wrote:

“... the fashion for several ladies to have evening assemblies, where the fair sex might participate in conversation with literary and ingenious men, animated by the desire to please... were denominated Bluestocking Clubs.”

In 1769, Horace Walpole called Mrs. Montagu’s original Bluestocking Society “the first public female club ever known” and added that most of the ladies were “of the greatest beauty, and most of the young men of fashion were of the club.” Although many prominent men of letters frequented the early bluestocking gatherings — and, in fact, Mr. Benjamin Stillingfleet is said to be the first person to have worn blue stockings to a meeting — Bluestocking came to be associated with women.

The term’s connotation is often less than positive: bluestockings are sometimes pictured — partly due to Daumier’s poison pen — as unfeminine, pedantic, humorless, and self-important.

But the letters of the original Bluestockings paint a distinctly different picture. R. Brimley Johnson concludes in the introduction to his 1926 book, Bluestocking Letters:

“Always ladies, never pedants, they regarded life with intelligence and common sense, formed their own opinions, followed their own tastes; and accomplished something towards the ideal of a gay and frank comradeship with brilliant and learned men.”

We owe a lot to these women! And what did Lord Byron have to say about all this? Lord Byron had this cynical view of the Bluestockings:

The Blues, that tender tribe, who sigh o’er sonnets
And with the pages of the last Review
Line the interior of their heads or bonnets,
Advanced in all their azure’s highest hue.
They talked bad French of Spanish and upon its
Late authors asked him for a hint or two.
And which was softest, Russian or Castilian,
And whether in his travels he saw Ilion.


Get the latest deals and more. Sign up now and get 10% OFF your order!