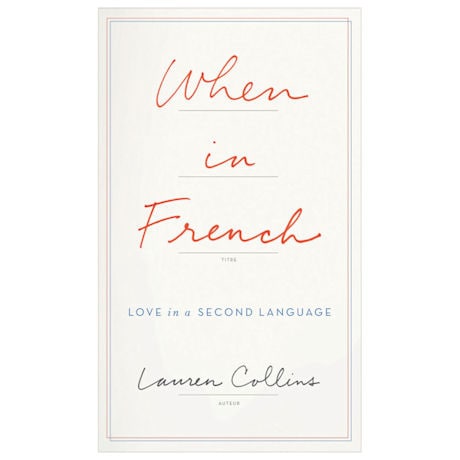 When in French: Love in a Second Language

Lauren Collins
# UM3292 Hardcover, 243 pages; 2016
To be successful at learning a language, one has to undertake a form of time travel, regressing to a childlike state of unembarrassed receptivity, in order to stand a chance of turning into a respectable adult.

An expat writer living in London, Lauren Collins met and fell in love with a Frenchman named Olivier. But it wasn't until the couple married and moved to French-speaking Geneva that Collins decided to learn her husband's native language. This smart, funny, multilayered memoir depicts the ups and downs of courtship in a foreign culture, recounting the often hilarious communication barriers between Collins and her new family (like when she inadvertently told her mother-in-law that she gave birth to a coffee machine) and the humbling experience of learning a new language as an adult. But beyond Collins's personal reflections, When in French is also an insightful foray into the history of language and a breezily profound meditation on cultural and individual identity. I loved this book (and I learned that that's a particularly American sentiment). (AG)