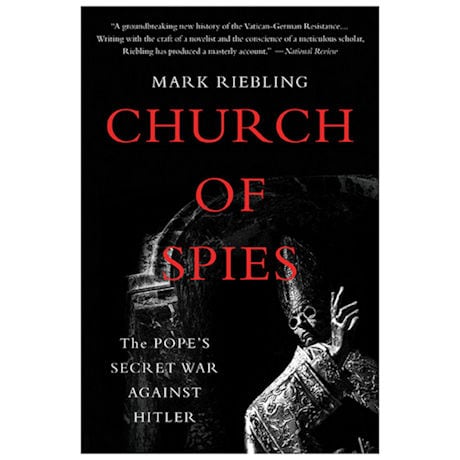 Church of Spies: The Pope's Secret War Against Hitler

Mark Riebling
# UM2282 Paperback, 375 pages; 2015
During the German occupation [of Rome], the SS had arrested 1,007 Roman Jews and sent them to Auschwitz. Fifteen survived. Pius said nothing publicly about the deportations. Over the same period, 477 Jews had hidden in Vatican City, and 4,238 received sanctuary in Roman monasteries and convents.

Pope Pius XII's wartime papacy has long been beset by controversy, amid accusations that the pope - crowned just six months before Hitler invaded Poland - didn't leverage the Vatican's considerable influence to stop the horrors of the Holocaust. Yet this eye-opening historical account paints a different portrait of the Italian-born pontiff, arguing that Pius's public neutrality was all a cover: He secretly worked with German plotters - some of whom were high-ranking Nazis - to murder Adolf Hitler. History buffs will be astounded by just how deep and varied the plots against Hitler were, and how close many came to succeeding, as devout Christians from the pews to the pulpit to St. Peter's Basilica risked (and often gave) their lives in a covert battle against evil. (KG)