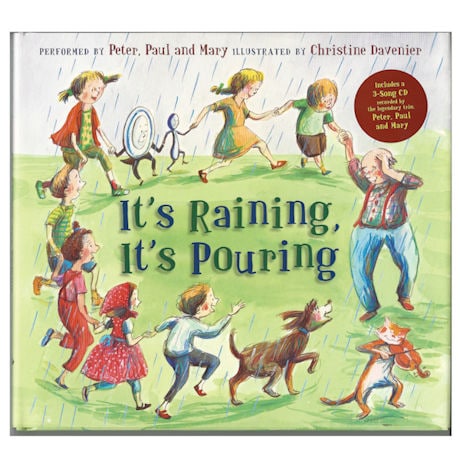 It's Raining, It's Pouring

Peter, Paul, and Mary and illustrated by Christine Davenier
# UM2022 Hardcover with CD, 32 pages; 2012
It's raining, it's pouring, the old man is snoring.
Bumped his head, and he went to bed,
And he couldn't get up in the mornin'.
Rain rain, go away. Come again some other day.

In 1962, American folk singers Peter, Paul, and Mary released their debut album, including the track "It's Raining, It's Pouring," which combined beloved nursery rhymes. Fifty years later, illustrator Christine Davenier built a delightful story around the song, her cheerful paintings depicting a family full of children entertaining themselves indoors on a rainy day. Your young reader will love this melodic read in any weather, especially when you cue up the included CD - featuring "It's Raining, It's Pouring" and two other songs by Peter, Paul, and Mary - for a storytime sing-along! For ages 2 to 5 years. (KG)