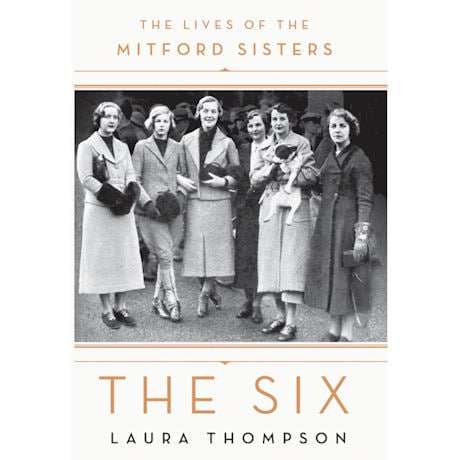 The Six: The Lives of the Mitford Sisters

Laura Thompson
# UM0022 Hardcover, 400 pages; 2016
These girls are prize exhibits in a Museum of Englishness. What they represent is complex, although their image has a divine simplicity. And whatever one's opinion of what they represent, it is impossible, in truth, to find them boring.

The staggering facts of the Mitford sisters' remarkable lives would seem ridiculous if they weren't true. Each "bright young thing" was fiercely independent and eager to experience the world beyond her sheltered, upper-class British upbringing. The intertwining narratives about Nancy (the writer), Pamela (the countrywoman), Diana (the fascist), Unity (the Nazi), Jessica (the communist), and Deborah (the duchess) are by turns charming and appalling - and always fascinating. As the sisters - born between 1904 and 1920 - traipse dauntlessly through Europe's charged political landscape, loyalties endure, rivalries boil, and scandals abound. Laura Thompson's stylish biography, as gossipy as it is gripping, adds significant insight to this amazing family's story. (CH)