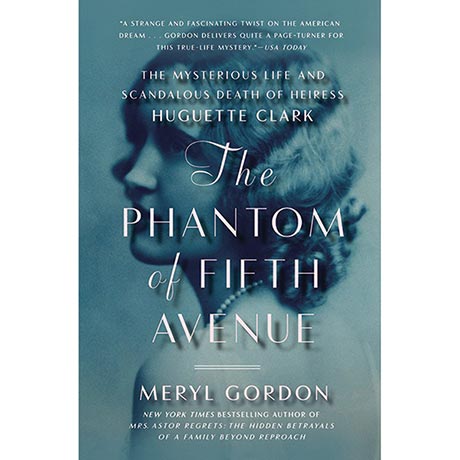 The Phantom of Fifth Avenue: The Mysterious Life and Scandalous Death of Heiress Huguette Clark

Meryl Gordon
# UK5582 Paperback, 382 pages; 2015 (2014)
Born in 1906 to the second-richest man in America, Huguette Clark grew up in a Beaux Arts mansion in glittering early-twentieth-century Manhattan. She became a painter and quite the social celebrity as a young adult, but after a brief failed marriage, she began a strange withdrawal from society. Increasingly reclusive, Clark ultimately abandoned several palatial estates and took up residence in a hospital, despite being healthy. She employed twenty-four-hour care for company (and for helping with her doll collection and artwork) and, over the years, gave huge financial gifts to a variety of people in a seemingly haphazard manner. Clark died in 2011, leaving a will that caused years of contention and controversy. Meryl Gordon creates a vivid and tender portrait of this enigmatic woman whose enormous fortune shaped her life in myriad fascinating ways. (CH)

This title is part of our 2016 Life Stories Book a Month package.