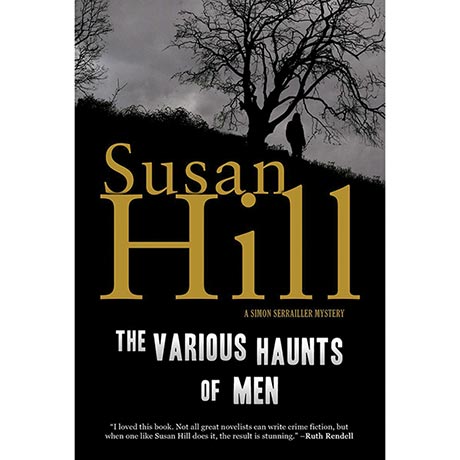 The Various Haunts of Men

Susan Hill
# UK5392 Paperback, 438 pages; 2008
When Angela Randall vanishes during her daily run, her disappearance nearly goes unnoticed. Because she's an obsessively private woman with no family and few friends, the village police suspect she's simply skipped town for a fresh start. But Detective Sergeant Freya Graffham, who left London's Metropolitan Police for her own fresh start in Lafferton, isn't so sure...especially once she finds a pair of expensive cufflinks and an intimate note to an unnamed man among Angela's belongings. Then another woman vanishes during an early-morning walk, and Freya knows beyond a shadow of a doubt that someone dangerous is prowling the sleepy streets of Lafferton - and there's no telling who the next target will be. A brooding police procedural that builds layers of suspense slowly and methodically, The Various Haunts of Men leads readers deep into the minds of a killer, the victims, and the police officers desperate to find them - all culminating in a shocking conclusion! (KG)