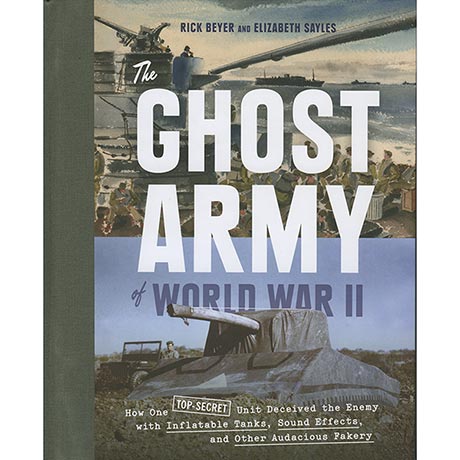 In January 1944, Allied forces launched one of the most ambitious deceptions of World War II: the Twenty-Third Headquarters Special Troops, aka "the Ghost Army." Four units of engineers, radio operators, soldiers, and artists (including fashion designer Bill Blass, wildlife artist Arthur Singer, and painter/sculptor Ellsworth Kelly) were tasked with creating fake Army divisions "to confuse and confound the enemy." After the D-Day invasion, the Ghost Army maneuvered inflatable tanks, Jeeps, and artillery across France; impersonated Allied radio transmissions; and used sonic deception to simulate the sounds of troop movement, all within mere miles of enemy lines. The project was so top secret that few in the U.S. Army even knew it existed, and it wasn't fully declassified until the 1990s. Now you can finally read the Ghost Army's incredible story, illustrated with photographs, maps, and sketches and paintings created by the artists themselves as they crossed Europe. Truly amazing! (KG)